When Players log into an MMORPG, they like to play it, not read a book. This doesn't mean that there shouldn't be a storyline in the game. But more often than not, the amount of text is way over the top. World of Warcraft limits the amount of text for a quest to 511 characters – and this is still too much. There is a reason why Twitter limits the text to even fewer characters, with obvious success. 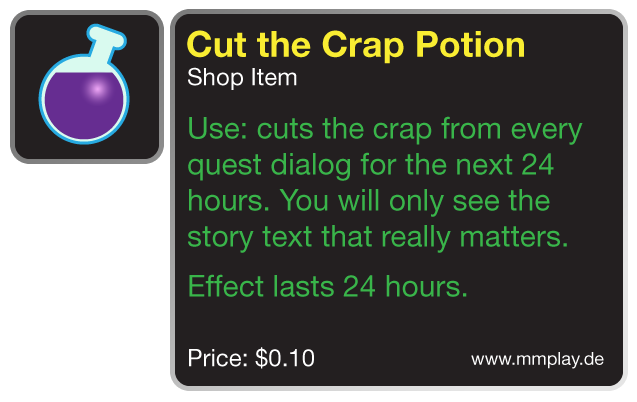 If a quest text consists of 150 words in average or 1000 characters, and a player gets like 15 quests in an hour, this is 15,000 characters of story to read. I doubt many players read any of them. So the result is not a game with a deep storyline, it's a game with no story at all, because nobody cares to read it. The players can't judge in advance on which story is important and which isn't, so they usually opt to not read any at all.

A good MMORPG should choose the quest texts wisely and cut everything as much as possible. If most quest texts are short, the occasional longer texts will get noticed and have a chance for players to actually read them. And even then, a "longer" text shouldn't be longer than the 511 characters of World of Warcraft – and even that is too long.

It's much better to have one story line and tell it in a series of quests, than to have a story for each quest and use lots of text to tell it. It's even better, to not tell the story in words but show it in the game.

There will still probably always be filler quests in MMORPGs. And it's perfectly fine. Players don't even want to be involved with heavy story arcs in every quest all the time. It's ok to have recreational short quests, to just finish them quickly without thinking much about it. Having more fun with actually playing the game and fighting mobs than caring about a story. That's good.

The worst an MMORPG can do, is having "kill ten rats" quests with walls of text, just to tell the players to "kill ten rats". If the quest is about killing ten rats, just say so. Don't try to make up for a shallow quest by using a huge wall of text. It doesn't work like that. If a game likes to improve on "kill ten rats" quests, there should be a reason why the ten rats must go. Not a reason hidden in a long quest text, but a reason in the greater story of a zone.

If the quests are meant to be filler quests, than don't pretend them to be something else and don't bore the players with long quest texts. It's the opposite of what a quick filler quest should be.